In 2006 I made my first pilgrimage to Schindler House, between Melrose and Santa Monica, just East of La Cienega. Although its design was revolutionary at the time it was designed, 1922—it was intended as a kind of single-level, shared-kitchen duplex for the architect’s own family and another young family—I found the house dark and somewhat claustrophobic. But I loved the garden. Consisting of four major elements: bamboo, grasses, hedge and lawn, it is a perfect adult, urban backyard. The contrast of the soft, wild looking grasses against the geometric trimmed hedges is poetry. The hedges and bamboo screen the views of three-story apartment buildings that encroach on the property.

Architect Rudolph M. Schindler was born in Vienna in 1897 and began working for Frank Lloyd Wright in Chicago in 1918. After going to Los Angeles for Wright to supervise the construction of Hollyhock House, he established his own practice there, designing more than 4oo projects, “consisting largely of low-cost single-family houses for progressive clients,” according to the bio on the site of the MAK Center, the architectural bookstore and resource center headquartered at Schindler House. Schindler’s later work was surely an inspiration for my house and the 50 or so similar houses in southern Westchester County, NY, that have characteristic Midcentury Modern floor plans, construction elements, and details. The name of the Westchester architect is unknown.

I photographed the Schindler House gardens five years ago and came back last week to see what had changed. Very little. The trumpet vine (Campsis radicans) was in bloom. This garden remains an object lesson in what can be done with a few inexpensive plant materials and good planning and maintenance. 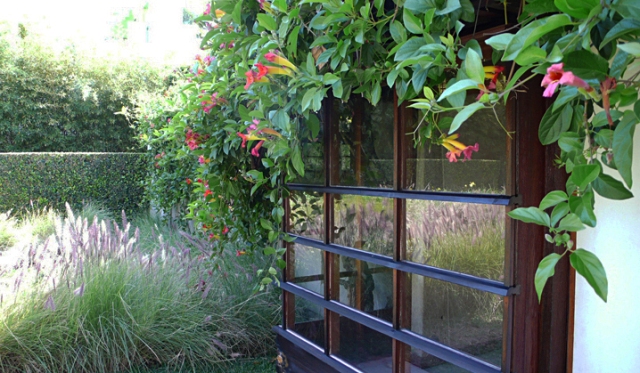 The MAK Center runs an architecture bookstore at Schindler House and sponsors student internships, lectures, tours, and other events.. Admission to the house and garden is $7.