Over-the-Top Flowers at the Bottom of the World

Posted on March 1, 2011 by writedesigner

Last month, my friend Renee Shamosh, greenhouse co-chair of the Garden Club of Irvington-on-Hudson, and her husband Michael, took a vacation trip to Argentina and Chile. Their final stop was Ushuaia, the southernmost city in the world, capital of Tierra del Fuego Province, Patagonia, Argentina.

Ushuaia has a subpolar oceanic climate, that is, temperatures average 35°F in July, the coolest month, and 51°F in January, the warmest month. It snows or rains there 200 days a year, and it’s often cloudy and foggy, too. Strong winds whip the region. Similar climates are found in Alaska and Iceland.

Why go there? Not for the weather. Or to see the penal colony established in the late 19th century, or the abandoned gold fields. Renee and Michael visited areas where tourists can admire the stunning natural beauty of the subpolar landscapes while walking among the abundant local wildlife: penguins, sea birds, seals, guanaco, and orcas. “You won’t believe how beautiful, remote and isolated it is,” they said.

What else did Renee find there? Lupines! Lupinus regalis is a member of the legume family and these tender perennials bear tall, spectacular multicolored flower spikes in late May or early June. The best known are Russell hybrids, which can grow up to 5 feet tall. I’ve admired them—great drifts of pink, red, purple, lavender, yellow, and bicolored—on Cape Cod and Nantucket—but gave up on having them in my own garden after three years of unsuccessful attempts at growing them from seed. And now I know why they failed: our climate is not like Tierra del Fuego, Alaska, or Iceland (at least in the summer). My seedlings were fine, but after being transplanted into our hot New York garden they literally melted away. 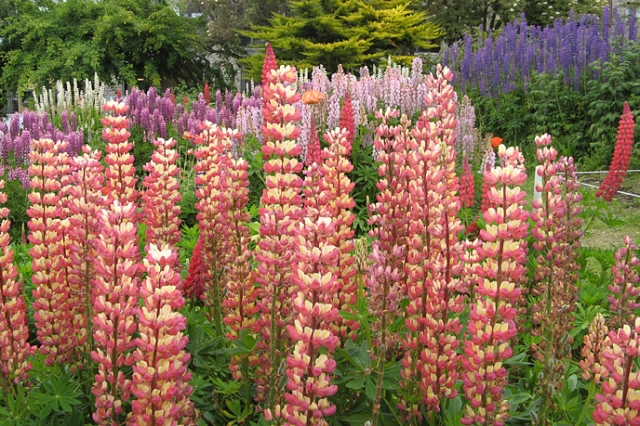 If you’d like to try (and who wouldn’t after seeing the picture above), here are a few tips. Lupines like cool temperatures, moderately rich, well-drained, acid or neutral soil, continuous moisture, and full sun. It sounds like a total contradiction. But if you want to give it a shot, start from seed under lights, pot up into 4-inch pots, then transplant into the ground as soon as the soil can be worked. Don’t disturb the roots after planting. The tallest varieties should be protected from high winds and staked to prevent toppling. Good luck (and let me know what happens). 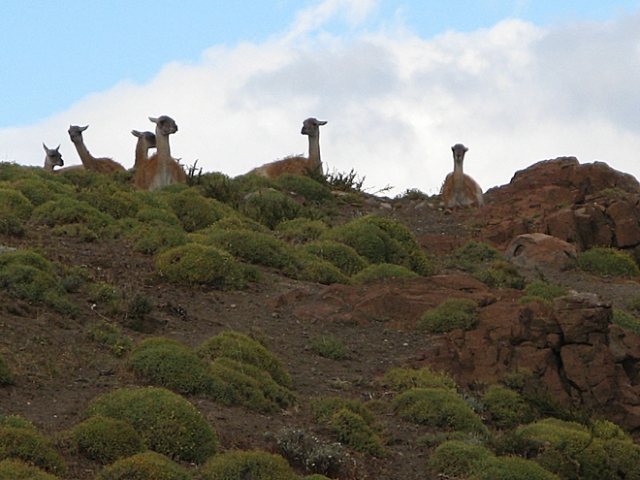 The Shamoshes were also lucky enough to be in Patagonia during guanaco mating season (!) Over dinner the other night I learned that the guanaco (Lama guanicoe) is a small camel native to South America that stands about 4 feet tall. Almost half a million of them live in herds in Chile and Argentina. As you can see, they are muy guapos (very cute) with sweet faces, perky ears, and soft brown coats that blend right into the foliage.

Graphic designer, writer, and gardener Ellen Shapiro is based in Irvington, New York. A frequent contributor to design blogs and magazines including Print, Imprint, Salon.com, Communication Arts, and Etapes, she writes about trends, issues and personalities in design, illustration, photography, and visual culture around the world.
View all posts by writedesigner →
This entry was posted in Horticulture and tagged Argentina, Chile, guanaco, lupines, Patagonia, Russell Hybrid, Tierra del Fuego, Ushuaia. Bookmark the permalink.